Today is the last day of the XXX Olympiad. I know many cooks have found inspiration in the cuisine of the host nation, England, for their celebratory baking. I have taken a more patriotic approach, though ironically the base recipe comes from Nigella Lawson, one of England’s best loved cooks!
These ‘Green and Gold’ cupcakes are lemon and lime flavoured fairy cakes (from How to be a Domestic Goddess), covered in a plain white buttercream icing and adorned with the colours of the Olympic rings. The batter is fairly stiff, so it was quite easy to ensure the cupcakes were half yellow and half green, rather than having a marbled effect. This way, it is much more striking when they are eaten!
The quantities given below make 24 cupcakes. If you wish to make them plain, simply omit the zest and food dye. These cupcakes decorate beautifully, coming out of the oven lovely and even, making icing much easier. One final word of advice; I found it easier to simply make the batter twice and add the zest and appropriate food colouring to each bowl, rather than making one large double batch and then splitting to flavour it. Apart from anything else, the zest should be beaten into the wet mix and not added after the flour, or the batter will be over-worked.

Start by pre-heating your oven to 200° and lining 24 muffin cups with patty pans. Mine were yellow and green, of course.

Next, cream together the butter and sugar until light and fluffy. Now add the appropriate zest and beat briefly to combine.

Now beat in the eggs separately, adding a tablespoon of flour between each one. Then carefully add 2 drops of food colouring and beat well. If the colour is not as vivid as you would like, add another 2 drops and repeat until you have the colour you want. Don’t add any more than 2 drops at one time; food colouring can quickly get out of hand!

Now fold the flour into the mix with a large metal spoon  and, when all is just about combined, add 2 tablespoons of milk to create a smooth, dropping consistency (i.e. the batter should hold it’s shape but fall relatively easily off your spoon when tested).

To create the distinct halves within each cupcakes, I found it easiest to put a spoonful of lime batter in each patty pan first off, and then repeat with the lemon batter; rather than trying to spoon out both batters at once. 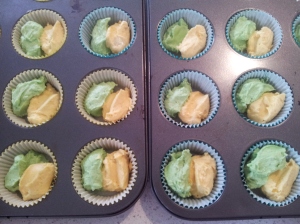 Pop into your oven for 12 – 15 minutes. Nigella recommends 15-20 minutes but mine were definitely done by 15 minutes, so just check them at the 12 minute mark to be sure you don’t overcook them.

While they cool, put together your icing. In a clean mixing bowl, place the softened butter and spoon the boiling water over it. Stir until the butter is pretty well melted, then sift in the icing mixture. once it has come together, add a tablespoon of milk and the vanilla essence. Stir well and, if need be, add another tablespoon. Repeat until you reach a spreading consistency that still holds it’s shape.

Now gently spread the icing over the cooled cupcakes (I have found a paté knife to be the best tool for this) and decorate with the M&Ms in the Olympic ring colours.

I have made these to enjoy while watching the closing ceremony, but you can enjoy these at anytime you’re feeling especially patriotic. Australia day springs to mind; perhaps with matching green and gold icing for the occasion! As plain fairy cakes, these would be beautiful at your next afternoon tea, adorned with royal icing and sugar flowers.
These will keep for a few days in an air-tight container.