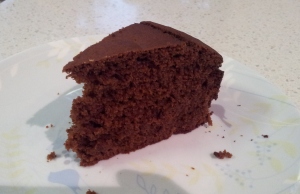 Over the recent long weekend, I had a little extra time on my hands and decided to finally try a recipe from a book I have had for quite a while. Bought for me by my mother, as a humorous gift, the book is called Cakes Men Like and it is a collection of “50 fun-filled recipes” that compiles recipes from the 30’s and 40’s printed by companies to promote the use of their product. This particular recipe was printed in the Cook Book by Reddie Wilcolator – by the looks of it the company mascot for Wilcolator Ovens.

Although I already have a fantastic gingerbread recipe (Ena’s Gingerbread), the tastes and textures are quite different. I really feel this recipe is best for an afternoon tea, while Ena’s Gingerbread is lovely and dense as a warm dessert with a little vanilla ice cream.

These were the original instructions for this recipe: “Mix as butter cake – bake in paper lined sheet pan 45 minute to 1 hour.”

As I don’t have a copy of the butter cake in the recipe they refer to, I proceeded as outlined below.

Firstly, preheat your oven to 180°. Line and grease a 20cm round cake tin.

In a bowl, mix together the melted butter, treacle and golden syrup and milk.

Into the same bowl, sift in the flour, bi-carb soda, cinnamon and ginger.

Using a butter knife, fold in the flour until just mixed.

Pour the batter into the prepared cake pan and bake for about 45 minutes, or until a knife comes out clean when tested.

Being such a brief recipe, as well as being printed completely un-edited since being originally printed, I was fully prepared for the cake to fail entirely; or at least to be less-than-palatable to our modern tastes. (Which explains the lack of photos – I didn’t think this would make it onto the blog!). On the contrary, this was one of the easiest, most delicious cakes I have ever made, not to mention the spectacular texture. It was like a close, moist sponge cake and the texture alone means I will certainly be making this again.

For the record, it was indeed very popular with the men in my house (I quite enjoyed it also!).