I’ve called this post “Nigella-Inspired Spanish Chicken” rather than “Spanish chicken with chorizo and potatoes” because that’s literally what happened. I opened Kitchen, looked at the recipe and decided that there wasn’t nearly enough spice or Spanish flavours in the dish to call it spanish chicken. So, as always, I used what I had and what I thought would work best. Sorry Nigella, sometimes I just can’t leave well-enough alone. As it turns out, mine was a spicy, moorish chicken bake with complex Spanish flavours. I’ll credit Nigella for the inspiration (Spanish is rarely a flavour palette I turn to); but I’m taking the credit for this recipe!

Firstly, heat the oven to 180c. Then dice your onion and garlic as finely as you like. Now thinly slice the chorizo, thin is best as it provides more surface area with each sausage, which helps spread the flavour further.

Next brown the onion, garlic and chorizo in a pan. You can add olive oil here if you wish but there should be enough fat in the chorizo to brown the onion. When they are about half done, add the chicken to the pan to brown. It will do most of the cooking in the oven, we are just giving it colour here. Also add the paprika/s as you add the chicken, I added 1 teaspoon of smoked and one teaspoon of hot paprika, in addition to the teaspoon of chilli flakes added later. This brought the dish up to about a ‘medium’ on the chilli scale.
Throw the tin of tomatoes and the extra chilli and vegetables in the frypan, stir briefly before removing the chicken to a baking tray (at least 5cm deep) and pouring the contents of the pan over it. (I would add the raw potato to the baking dish with the chicken then pour the sauce over everything if I had used potatoes). Pop into the oven for 20 minutes, check the chicken, turn it and pop it back in for another 20 minutes. Obviously the cooking time will change depending on the size of your chicken pieces. 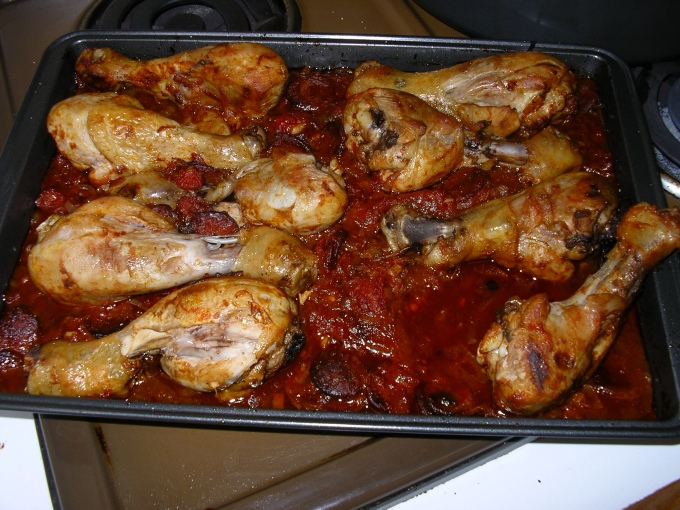 This would be delicious served over polenta, or, if you were organised enough to add potatoes to the pan then some fresh crusty bread would do the trick. A salad on the side and you have an easy dish for weeknight dinner or to share with good friends on the weekend.